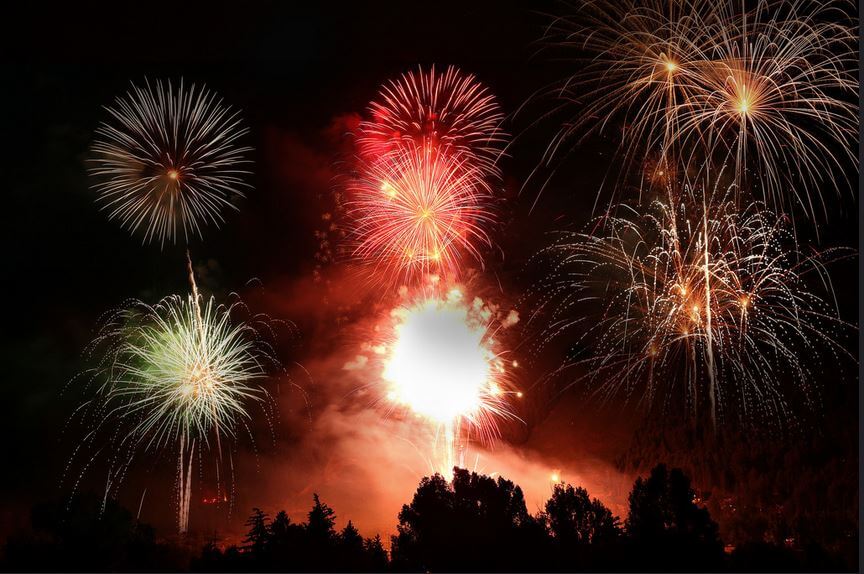 Growing up in Chicago, we would take public transit and head down to the Loop to watch the fireworks display. It was almost like a rite of passage as a teenager. Last year, we had the opportunity to check out Lake Tahoe’s festivities, and I have to admit… Riding your bike to the lake with the mountains as a silhouette was a marvelous way to celebrate the 4th. It got us thinking – “What other amazing mountain towns can you see fireworks without the massive metropolitan crowds like New York or Boston?”

We HAVE to start with our hometown. If you haven’t visited, you should! The crystal-clear water of Lake Tahoe plus the Sierra Nevadas will be the most visually arresting display in the country. But, be forewarned! Over 125,000 visitors check out this display so you need to plan ahead. Make it a day on the beach. Get your spot early and bring enough supplies to stay all day. Don’t forget to check out our Lake Tahoe Guide for local spots to eat and drink at plus much more!

Where to watch: Fireworks are visible from each town around the lake. Some popular hang-outs are Nevada Beach, Chimney Beach and Commons Beach. The adventurous can even watch from the summit of Mount Tallac but nothing beats being out on the water for the show. Book a spot aboard one of the many boating outfits such as The Tahoe Queen, M.S. Dixie II, Tahoe Amore or Tahoe Exclusive Boat Rentals.

Vail is home to not one but MULTIPLE displays of fireworks. The biggest in the region is right next door to Vail in the town of Avon, Colorado – the gateway to Beaver Creek Resort. In fact, they’re famous for the show they put on over Notthingham Lake. With over 10,000 shells set to blast to the heavens, you won’t go home disappointed. Come early and throw your blanket down in Harry A. Nottingham Park. You’ll enjoy food vendors, a beer garden and family-fun all starting at 5:00 p.m. and ending at 10 p.m. Don’t stay up too late though! The next day in Vail is the region’s largest parade starting at 10 a.m. followed by Vail’s fireworks display in the evening. For more info

Town Square Shootout – Watch a lively reenactment of frontier justice at the Jackson Town Square. This show is the longest, continuously running shootout show in the country!

Jackson Hole Rodeo – The rodeo is regularly held each Wednesday and Saturday during the summer season at the Teton County Fairgrounds. The 4th of July Rodeo is a fine western tradition and a wonderful way to spend an evening as the sun sets over the Teton Range.

They finish it off right with a fireworks display in not just one location but TWO: The base of Snow King Mountain in the Town of Jackson and at the base of the Tetons in Teton Village. For more info

Kick the day off with a pancake breakfast in the City Park then head up to Historic Main Street. The Annual 4th of July Parade with over 70 floats highlighting its colorful history will fill the streets. After that, the choices are endless! Enjoy listening to live music, run a 5K run sponsored by Cole Sport, watch rugby games or have a cold brew in the beer gardens. There’s literally something for everyone. After a full day of fun, it’s followed off by dessert… fireworks at dusk. For more info.

In the end, we hope you have an amazing fourth of July. If you looking for a few more ideas, check out last year’s 4th of July post. Happy festivities!