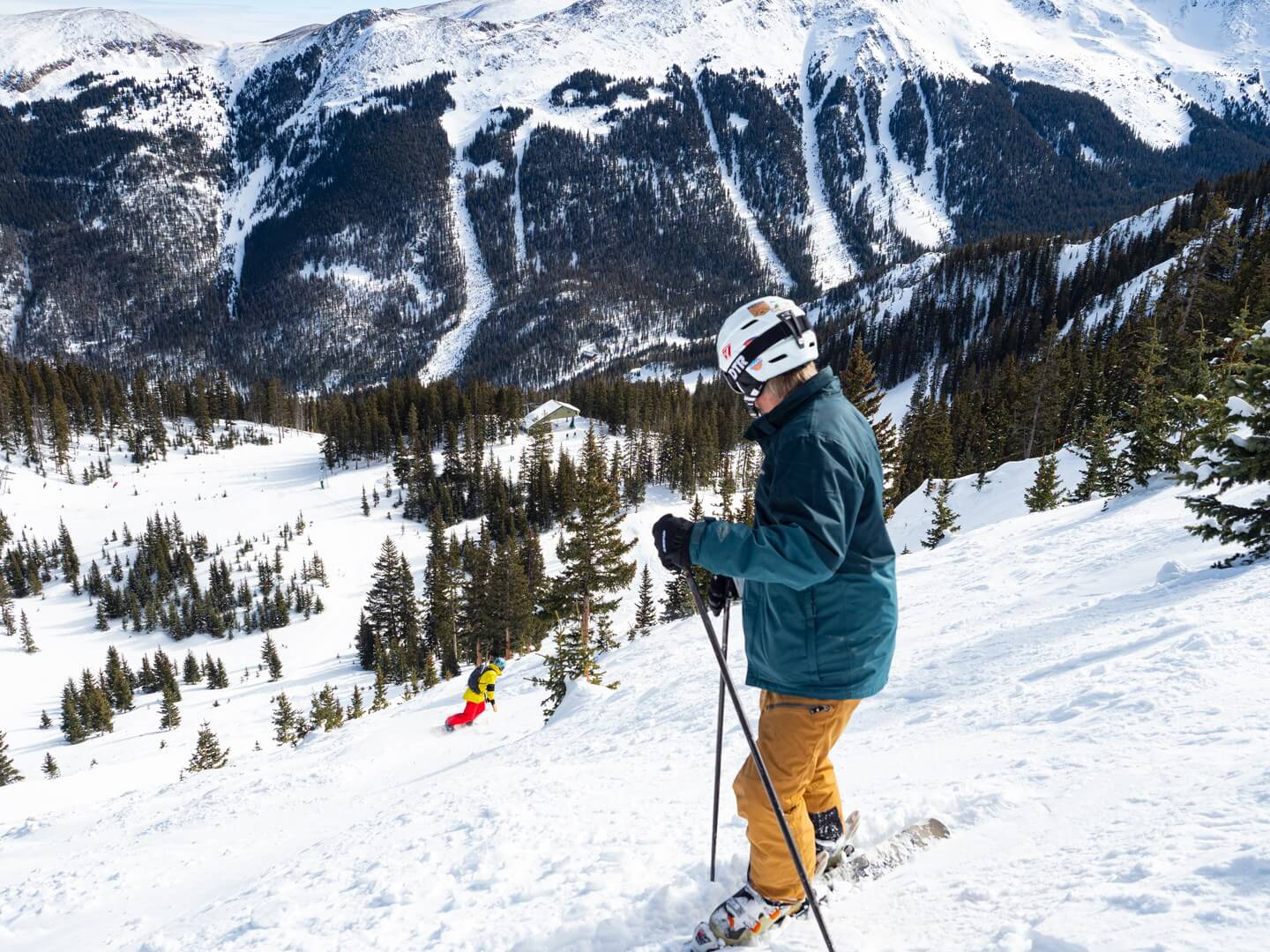 Daniel Gibson showing us where the good steeps are in Taos - Photo by: Local Freshies®

When talking about skiing in New Mexico, most only mention Taos. Sure, it’s the primary jewel of skiing & snowboarding in the southwestern state, but there’s MUCH more to the area than just Taos. Like any great ski destination, there’s plenty of other places to fit everyone’s skill levels, budget, or idea of a vacation. Here’s a rundown of all the Taos ski areas and what each provides.

As we stated in past posts, this winter is all about being flexible. If you’re ready to get on the slopes at one of these ski resorts, be sure to check New Mexico’s website with the latest restrictions and requirements which can be found on their COVID-19 Traveler Page.

Up first, the legend. When Ernie Blake picked Taos Ski Valley about thirty minutes from the town of Taos as the place to have his ski area, most thought he was nuts. It’s too steep they told him. Luckily, he followed his vision, and now it’s home to some of the steepest skiing on the continent. You’ll find long steep fall line groomers. Hair-raising chutes and challenging terrain. There’s enough for beginners and intermediates to test their mettle but be prepared to learn fast.

Since the beginning, Ernie saw that visitors would need help to really appreciate its terrain and so he introduced the concept of Ski Week. The idea was simple. Give visitors a chance to improve quickly, have more fun, and create a deeper connection to the mountain. To this day, this unique offering has helped make their ski schools one of the best in America.

Don’t Miss: If there’s one thing EVERY visitor should do is grab lunch at the Bavarian restaurant at the bottom of lift 4. Take in the views of Kachina. Sip on a cold bier from Germany that for some reason tastes better than anywhere else.

Planning a trip to Taos? From high-end luxury hotels to two century old adobe homes our list of the best hotels, motels, and B&B’s in Taos will make sure you have a great trip.

Less than thirty miles from the town of Taos, Angel Fire is the Disney World of Taos ski areas. Compared to Taos’ steep badge of honor, Angel Fire is more of an all-around resort that feels like Beaver Creek but without the price tag. You’ll find amenities like a sledding hill, a nordic center, and even snow tubing to go along with your ski vacation. For those who enjoy park be sure to visit the Liberation Park. It’s built by the Eppler family whom cut their teeth building features for the X-games.

From a purely ski/snowboard perspective, there are plenty of groomers to choose from and a few glades that even kids can get a taste for. Angel Fire also offers up the only night skiing in the state on Fridays, Saturdays, as well as holiday and peak periods. For adventure-minded athletic individuals, they even have a hike-to-zone offering up powder weeks after a storm.

Don’t Miss: If you’re wondering why it’s called Angel Fire, it’s because of the sunsets. Due to its topography and geographical location, the sunsets have this fiery red color that’s like “Angel Fire.”

Red River is the epitome of the old saying “don’t judge a book by its cover.” While it’s a family ski resort first and foremost, you’ll be shocked to find a vast array of terrain for all abilities. The backside provides a great place for kids to have fun and explore the widely spaced trees on their own without worry. For intermediates, don’t miss Boomtown. The trail rolls and rips around like a racecourse following the topography perfectly. And for experts, the terrain off of Catskinner is like the miniature version of Taos’ legendary trails. Not enough? Find the trail named after the original owner’s son, Linton, who now manages Red River. It’s narrow. It’s steep. And you’re right in front of everyone riding the Copper Chair.

One of the coolest parts of Red River is its location. All the trails literally drop you right back into town. And the town itself is only a mile long and a few blocks wide, so once you get there, you can park your car and not touch it the rest of the trip. Compared to the other Taos ski areas on the list, the feel of Red River is more Western with a sprinkle of Spanish influence. This is due to it being originally a mining town turned ski town.

Don’t Miss: If you’re there on a weekend or holiday, finish the day off at the Lift House. The main trail that drops into it becomes a spectator sport. People hoot, heckle, and cheer everyone that makes a spill down “The Face.” Just imagine a classic Warren Miller film.

Sipapu doesn’t try to be an international destination but rather a true-to-the bone affordable ski area. They focus on investing in the product they provide on the slopes and that includes snowmaking. Due to their upgrades over the years, they’ve held the title for the longest ski season in the southwest for the last fifteen years. Back in 2019/20 with a little help from mother nature, they had their earliest opening ever by turning the lifts in October.

This ski area harkens back to an era that’s more about getting out on the snow and enjoying it than the luxury items like gourmet fine dining or nightlife. In return, depending on the day you visit you can find lift tickets for as little as $34.

If a storm does roll in and deposits a bunch of snow, head to Taos Ski Valley first. Due to its sheer volume of steep terrain, talented skiers and snowboarders descend on it first. Days after a storm, we recommend heading to any of the other Taos ski areas listed above. Most visitors stick to the groomed runs or intermediate slopes so you’ll have the more challenging stuff pretty much to yourself.

We could write about the virtues of the Taos ski areas until the cows come home, but until you experience it yourself, you won’t realize just how good it really is. Plan that trip. You won’t regret it. To learn more about what’s there to do, what places to eat, and even insider tips on Taos, be sure to read our insider’s guide:

Things To Do In Taos NM