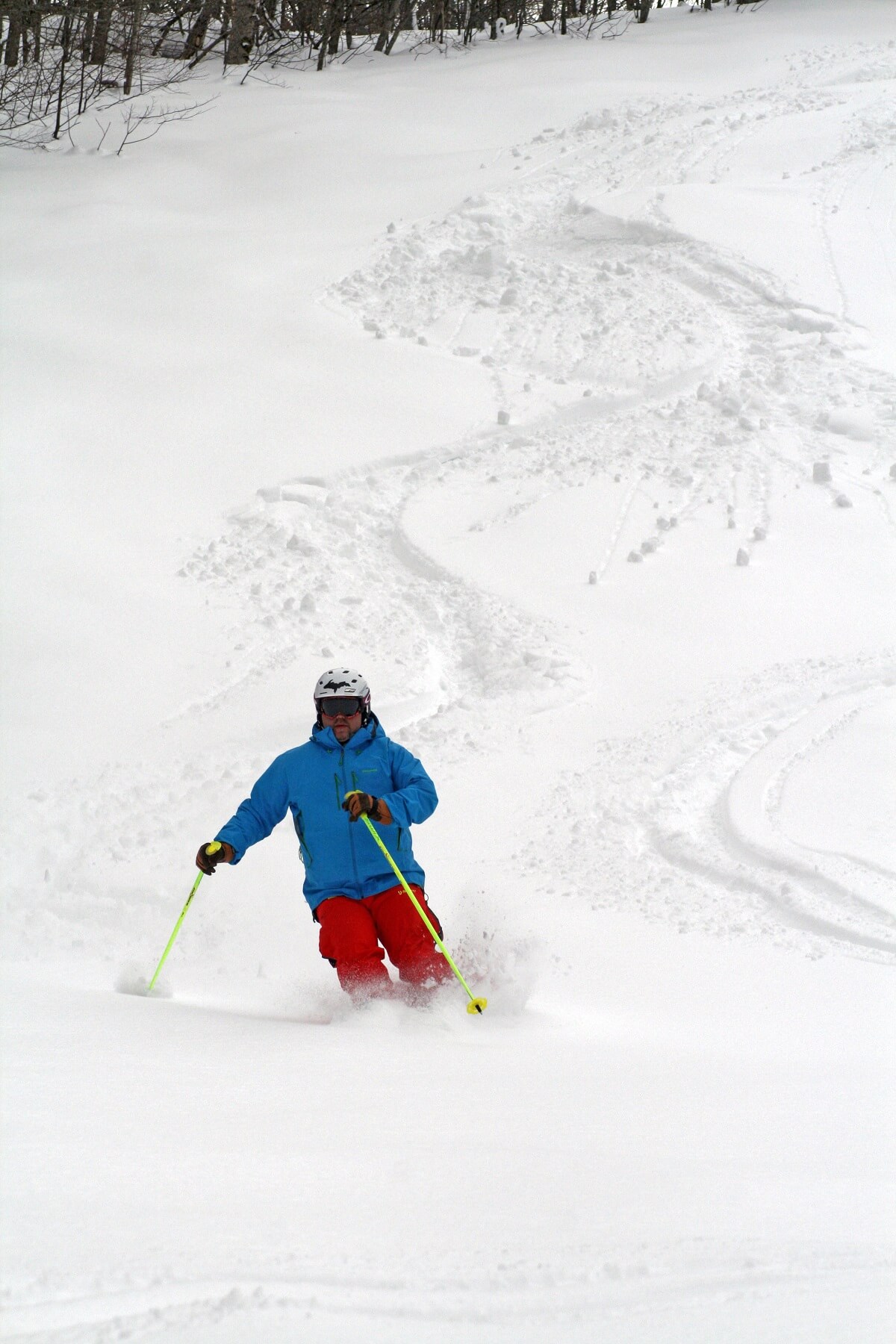 Our family’s hulking 1985 Chevy Suburban was nicknamed “Big Blue”. Loud, powerful, and a beast in any weather condition. Here I was, only thirteen years old sitting in the back of it with my entire family heading to the great white north. Our destination was a place called Indianhead Mountain Ski Resort. While Chicago’s skies were a steel grey, they yielded no snowfall. But, in the Upper Peninsula a winter storm was brewing. Unbeknownst to me, this trip would expose me to an addiction that my life revolves around… powder skiing. And it’s all thanks to my father.

Dashing Through The Snow, In My Rusty Chevrolet…

Scurrying out of town, the bright lights of the cityscape were quickly replaced by a dark skyline. The only thing you could see were the yellow mustard hash marks zooming past. My father’s intense gaze focused on the road ahead. On the radio blared a song by Da Yoopers “Dashing through the snow, in my Rusty Chevrolet…”. The song was kind of fitting since we were in a Chevy. The question on everyone’s mind was were we going to be dashing through the snow ourselves.

As we continued our journey northward, the deep, dark blackness of the farmland began to lose its grasp. Instead of wide-open spaces of the great plains, the scenery transformed into tall stands of conifers of the great north woods. Lurking in the gigantic shadows of those trees, I imagined wolves, coyotes, and pumas waiting for some unsuspecting rabbit to hop by and become their dinner.

Was That A Snowflake?

Peering out the front windshield, I focused on the darkness. Was that a snowflake?!?! My heart leaped out of my chest. Could it be? Not saying a word, I scrunched my face and squinted my eyes looking for any clues that it might be true. In an instant, near the border of Wisconsin & Michigan, our truck became a spaceship. The headlights exposed a wall of snow falling out of the heavens. Each flake softly hitting the windshield sliding right past us. The snow was so dry that we didn’t even need our windshield wipers.

Making it into the small hamlet of Ironwood, I gazed down the side streets. Each of them featured ten-foot walls of snow. My jaw dropped at the amount of snow. It was bigger than I had seen anywhere else in my short life. It made the town look like tunnels inside an ant farm. Continuing onward out of town, a twenty-foot-tall statue of a skier suddenly appeared. This way to Big Powderhorn! Alas… but, this wasn’t our final destination.

As we made the final turn onto Indianhead road, the snow continued to fall at a furious pace. The normal rumble of the diesel engine disappeared. Meandering our way through the forest, the silence was deafening. Everything outside of our metal steed was a marshmallow white including the asphalt and trees. The four wheels floated through the fresh white blanket as the large looming walls of snow guided us to our final destination. Creeping up over a small hill, the main lodge appeared over the horizon. We all let out a sigh of relief. We made it! Quickly checking in, we ventured over to our room. Our heads hit the pillows hard as we fell into a deep slumber like Snow White.

Come On You Pansies! It’s Not THAT Bad

Breaking the silence, my Dad flung the door open and stomped into our hotel bedroom. With a big smile he yelled at the top of his lungs, “GET UP! GET UP! We’ve gotten eighteen inches of snow overnight!” Both my brother and I groaned. The sun wasn’t even up yet. Why the heck should we get up this early? It’s not like we were going to miss anything. With a bit more urging, we got out of our warm toasty beds and threw on our snow gear. Swinging the door of the lodge open, the brutal cold smacked our face hard! It was only a few degrees above zero and the cold biting wind off the shores of Lake Superior halted our progress. “Come on you pansies! It’s not THAT bad.” my Dad yelled.

Indianhead Ski Resort Lodging Is At The Top

Shuffling through the unshoveled parking lot, we made our way over to the dining room. Slowly scarfing down our food, our Dad urged us to eat quicker. Why? The lifts weren’t going to be running for at least another two and half hours. All he said was, “You’ll see.” His goal was for us to get first tracks before anyone else. Compared to other ski areas, Indianhead’s lodging is on the top of the mountain which means you can start skiing before the lifts start turning.

In Front Of Us Lay A Blank Slate

Making it over to the top of the mountain, we looked down the main trail. Not a single track anywhere. A blank slate of perfection. Looking around, not another soul was in sight. Ratcheting in, I pointed my board down the slope and began my way down the mountain.

Picking up speed, the snowboard suddenly feels like it’s lifting off the ground. The floating sensation is unlike anything else I’d ever experienced. It felt like I was flying. Putting a bit of weight onto my toes, I lean into a carve too much. With a big poof, I slam into the soft pillow-like snow. Brushing off, I get up and try again and again. Nearing the bottom, I finally link a set of turns and stop near the chairlift. Unstrapping from my snowboard, I look up at my tracks. Imperfect, lots of bomb holes, and one set of linked turns. And it was created by me. Little did I know that this run would start my obsession of chasing storms.

As we waited for the lifts to begin spinning, I realized why my Dad pushed so hard to get us here this early. I enjoyed linking turns but riding powder, particularly first tracks, was a whole new dimension to the sport that I didn’t even know existed. Years later, I still thank my Dad for having me fall in love with powder.

Do you have a similar story?

3 thoughts on “Do You Remember… Your First Powder Day?”