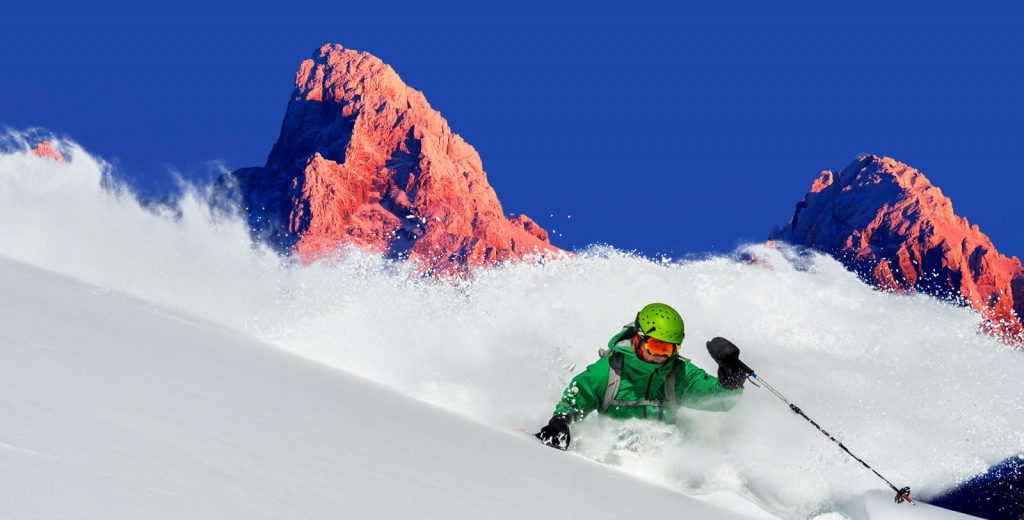 For those that want flexibility, ski only a handful of days, or their local mountain is on the Epic or Ikon Pass, we get it. To start things off right, we’ll be completely honest with you. We have an Epic Local Pass. Heavenly is only a few minutes from our house, so we use it to get in a few laps when we don’t have a ton of time. Do we go to resorts on the Epic or Ikon Pass for vacation? Rarely. We’re suckers for ski areas that feel less corporate and have big (small) mountain town personalities. If you’re like us, here’s 10 ski resorts on our bucket list that aren’t on the Epic or Ikon Pass.

This resort that has been on our radar for a LOOONNNGG time. Everything about this place is heaven. First, it’s one of the three resorts we talked about that has a LIMIT on their season passes. Second, the resort is HUGE! Over 8,000 acres of inbound AND lift accessed side country. Third, they receive on average over 500” of snow. Although limiting season passes may not make business sense, on a powder day, who cares!

Although Jackson might get all the attention, this little resort west of the Grand Tetons is about one thing… skiing! Literally, it’s one of the ONLY resorts in the US or Canada that rivals the consistent high quality fluff you’d find at the Utah powder mecca of Alta. If consistent powder days wasn’t enough, they don’t come with the crowds found at many of the other destinations either. If you’re a powder hound that hates being stuck in line or seeing tracks then make this YOUR destination.

Located along the famous “Powder Highway” next to the quaint town of Rossland, this place screams “independence!” In fact, that’s their marketing slogan – “the last great, unspoiled resort.” With fun terrain spread across 3,850 acres, this resort has a little bit of everything. From nice steep shots to ample amounts of well-pitched groomers, you’ll definitely be entertained for days! Combine that with one of the coolest mountain towns that still has a main street and no big box stores in the area… they had us at “hello!”

As the crowds swell at Stevens Pass and Crystal Mountain from the day skiers shuttling up from Seattle, a bit further down the road is a cozy ski area tucked away from the madness. Situated on the aptly named “White Pass”, it has the look and feel of a hardcore Mom & Pop resort. When we hit this area back in 2010, it was the FIRST day they opened up the Paradise Basin ever! Even though its been a decade, I’ve vowed myself to come back and hit this mountain again. Now that it’s on the Indy Pass, I have no excuse NOT to!

I still remember vividly reading about this ski area in a SKI magazine article years ago. As the old adage goes, “big things come in small packages”, and Turner is the epitome of this statement. It operates as a non-profit with only THREE employees during ski season. Only has one lift. Miles from any large metropolitan area. Most people would brush it off but as you look closer, you’ll notice something special about this place. The lift is over 2,110 vertical feet of steep FALL-LINE skiing. In fact, over 60 percent of its terrain is considered ‘expert.’ As resorts get bigger and more crowded, this Mom & Pop focuses on what’s important… the skiing.

At a base of over 10,000 feet, this powder hound paradise in Colorado is the stuff of dreams for those looking to ride REAL snow in the early season (sometimes as early as Halloween). Although most of the terrain is pretty mellow, who cares when it receives the MOST snow in Colorado. And only thirty minutes down the road you can stay in Pagosa Springs, home to one of our FAVORITE hot springs on the continent.

Steeps? Check. Glades? Check. No attitude and all fun? Check. Anyone that has stepped into the Canadian Rockies knows the beauty & wildness of this part of the world is unrivaled. Just as pure as its surroundings, you won’t find any sleigh rides, fur jackets, or day spas at this ski area. The focus is about skiing its massive 3,500+ acres. Alongside consistently cold winter temps which helps preserve the snow making, their weather also ensures the snow stays powdery days after a storm. AND, it’s another ski area on the Indy Pass which you can pick up for only $199!

For those foodies that want to make a trip not just to ski but also to eat & explore, Ski Santa Fe is a must. It may not be the biggest or snowiest, but it sure packs a unique, one-of-a-kind experience. From five-star quality food to culture over 400 years old & some of the driest snow you’ve ever seen, it’s unlike anywhere else you’ve been before.

We get it. Sometimes you need an all-around destination resort to cover your family or groups’ needs. Look no further than Schweitzer Mountain. They have all the bells and whistles you’d expect including well groomed trails alongside its legendary tree skiing. Although Schweitzer is an emerging star in the destination resort ranks, you’ll still find plenty of elbow room on its slopes, especially compared to the big boys like Breckenridge or Whistler.

Last but not least, we gotta show love to our home mountain. Like any Tahoe resort, things can get crowded during the holiday rush. But, in comparison to Heavenly or Kirkwood, it’s downright peaceful. With only 46 trails across its 2,000 acres, Sierra is known for its tree skiing thanks in part to the old growth of red firs that weren’t considered valuable during the mining days of Virginia City.

If you do have an Epic or Ikon Pass, enjoy it and head to one of those resorts this winter. They’re all amazing, have tons of amenities, and are a “Disney World” for skiers and snowboarders. But if you’re looking for an authentic experience that’s a bit different, these 10 resorts that aren’t on the Epic or Ikon Pass are well worth a gander. Heck, you might even see our trusty ’95 4Runner nicknamed “Pepper” parked in one of these ski lots this season.