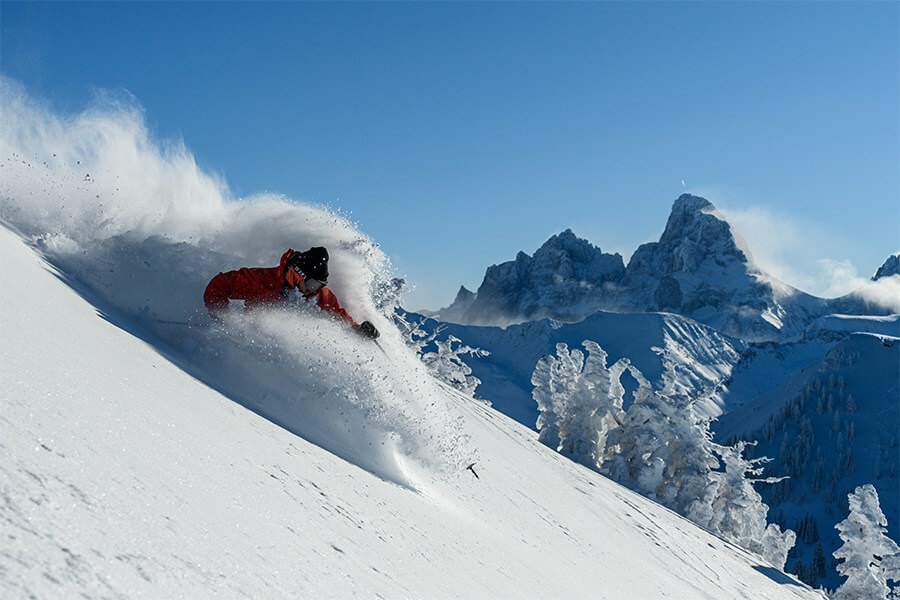 It seems like the latest thing in North America ski industry news is to invest in bigger, faster, and larger chairlifts. Personally, we really could care less about getting to the top quicker. That just means on a powder day the snow will get tracked out that much faster. Instead, what makes us excited about the upcoming season is new ski terrain. Give us more lift access acreage or better yet hike-to areas to thin out the crowds that much more. And here’s who is providing just that: new terrain to ski.

If you haven’t heard, Vail announced they’re spending $320 million across 14 resorts to enhance the guest experience for the 2022-23 season. This will include 19 NEW chairlifts. The question is out of this hefty investment, how much of it will include new terrain? Here’s the run-down: A few years in the making, Vail has officially gotten approval to install a new high-speed 6-person chair. Providing lift access to high alpine terrain topping out at 12,200’, it will increase Keystone’s lift served vertical to 3,000 feet. The detachable lift will service 500-plus acres of terrain in both Bergman and Erickson Bowls. Although already within Keystone’s permit, it will be now lift-accessed. For the 2021/22 season, the McCoy Park expansion will be Vail’s largest terrain expansion for this year. At 250 acres of skiable terrain, it will be home to 17 new trails and 2 new high-speed quads. Within this bowl, expect to find wide-open glades that beginners and intermediates can frolic through. Although it’s focused on families and beginners, it might be a good zone to explore when the more challenging terrain is tracked out on a powder day. We hinted about this news back in 2020. As many of you may know, expansion plans can be proposed, but until the action is made, it may not happen. Well, Reno’s Tahoe resort is putting its money where its mouth is. In fact, the $7.5 million investment will be the BIGGEST of the resort’s history. The plan is to have the construction completed by the 2022-23 ski season so you’ll have access to 112 new acres of terrain via the new one-of-a kind chairlift. Looks like the secret is out on Grand Targhee. With some of the most consistent snowfall on the continent each year, the ski resort keeps breaking their own skier visit records. Just last winter, total visits were up 17% over the record winter of 2017/18. To make sure powder hounds can enjoy big dishes of blower pow, they’re putting in the Peaked Lift as part of their $20 million master plan. What used to be the guided snowcat skiing area will now become part of the larger ski area adding nearly another 600 acres for you to explore in the 2022/23 season. While it may lack the big vertical of the West Coast, it more than makes up in its passion for snow sliding. Did you know that the “Troll” was the first ski area to open a chairlift in the nation? And based on last winter’s banner visitations, they’re investing in their product. The 3-Phase multi-year project will include another lift and NEW terrain on the southeast side along with additional upgrades.

Located almost perfectly in the center of the state of Wisconsin, you’ll find Granite Peak. A place that pushes the boundaries of how long a ski season can be – with skiing sometimes into May. A ski area with one of the larger vertical drops in the region and offering up over 68 runs. Do they rest on their laurels? Absolutely not! Although this is just in the proposal stages, we had to at least call it out. We’re not talking one or two more trails but more than 40 – nearly a 66% increase in terrain. Talk about swinging for the fences.

Lutsen Mountain Looks To The Future A little over 300 miles to the north on the western shore of Lake Superior lies a beast of a ski area especially in Midwest standards. Since I was a kid growing up in Chicagoland, I heard stories about this place. A resort with a gondola?!? Four peaks to explore. Runs over two miles long. It was HUGE in my mind. Just in the past decade, they’ve invested $25 million in upgrades. Are they done? Nope. Their latest proposal would nearly double the amount of ski acreage and would make it by far the biggest ski area with no one even close. Here’s a quick summary of the full proposal.