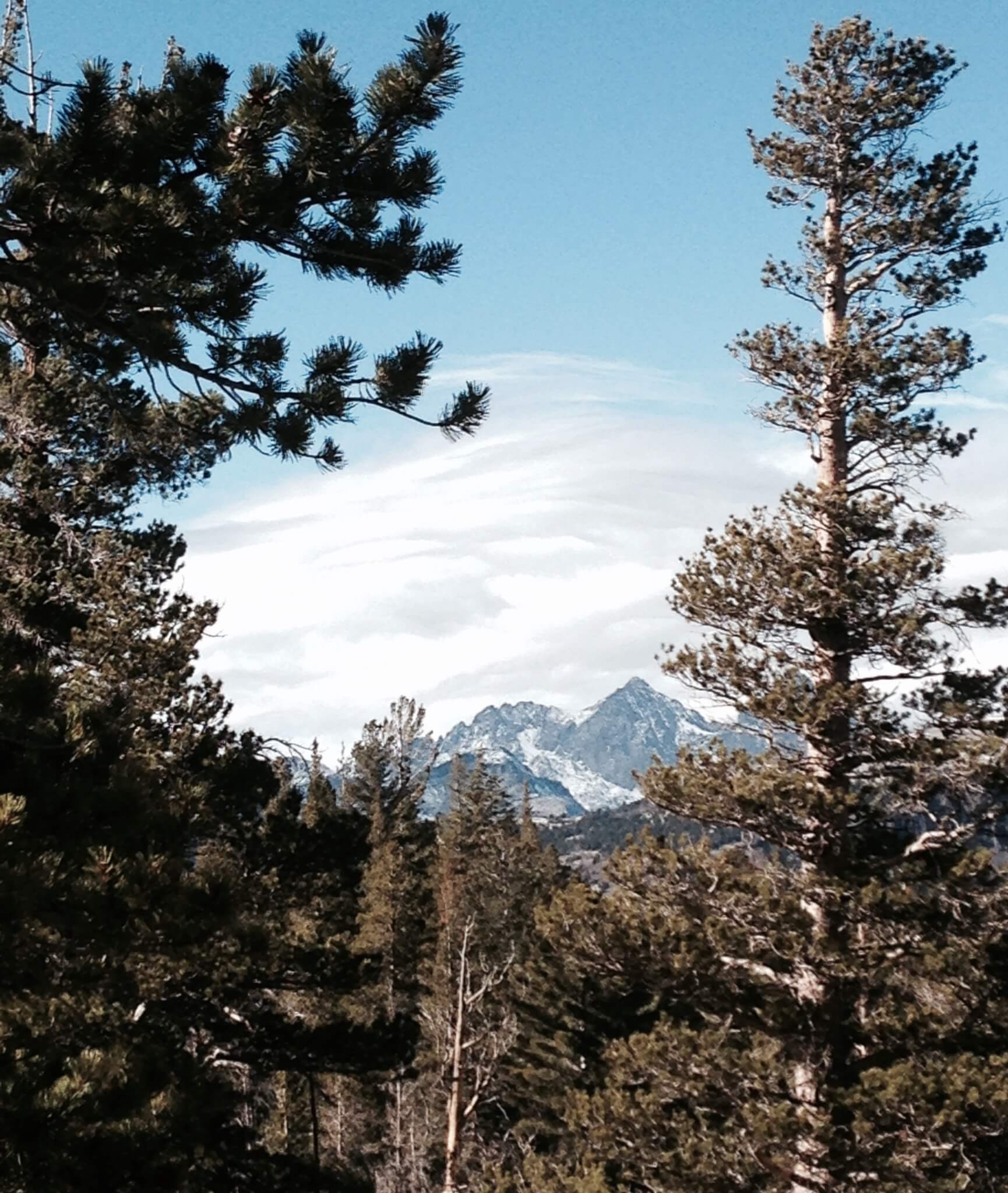 After I had my fill of turkey and visited with family during the long Thanksgiving weekend, I began to get antsy sitting around doing nothing. This time of year in the Eastern Sierra Mountains it’s hit or miss regarding snow. Definitely more of a “miss” lately. That’s the case this year. Not only was it the holiday, but also my birthday.  Being a lucky guy, I have an excellent wife who takes care of me and number 38 was no different.  She got me just what I wanted for my birthday…a brand new copy of Backcountry Skiing “California’s Eastern Sierra (2nd Edition).”  This is the backcountry skiing and snowboarding Bible for these parts.  As soon as it was in my hands I couldn’t put it down.

Time To Use The Backcountry Ski Bible

The Northern most part of the Eastern Sierra Mountains it covered was Bridgeport, CA. This is only a scenic 2 hour drive from home.  My brain started to conjure ideas. I had never ventured that far south for a backcountry session, maybe I should grab the guide and head out for a first hand look of the areas it covered. A little planning trip and something to occupy my time.  I sent a few texts to rally some friends, loaded my gear into the “Surf and Turf” (a mini-van I inherited), grabbed the dogs and hit the road.  Even if you aren’t into backcountry, a trip South from the Tahoe Basin on the 395 is well worth it.  The mountains along this route go from tree covered rounded tops to gnarly exposed peaks with serious altitude. The Eastern Sierra Mountains are even home to the highest point in the contiguous U.S.  West of Lone Pine, CA, Mt. Whitney stands at an elevation of 14,494 ft.  It’s very impressive.  My journey this weekend wouldn’t take me that far.  This weekend I headed to Mammoth, CA.

Driving along my mind began to wander.

I thought of the forecasted snow predicted for the upcoming week.  Whether or not it would happen didn’t matter.  It helped pass the time.  Before I realized I had made it to Bridgeport.  The dogs were ready to stretch their legs and so was I.  We pulled off at Green Creek and drove a quarter mile or so before stopping.  I opened the van and the dogs were more than happy to hop out an explore, which was the idea.  I grabbed a snack and began to spot the peaks.  Crater Crest (11,394′), Matterhorn Peak (12,264′), The Doodad (11,680′) and Mt. Walt (11,581′) were visible.  After studying maps and planning routes for an hour or so, we loaded up and headed south. Onward to Mammoth.

Before reaching my destination I took a detour through the June Lakes Scenic Route. It’s very beautiful and was worth the extra time. If you want to explore why you should visit be sure to read our article: Something Exciting is Happening on The June Lake Loop. Strolling through town I swung into the ski resort of the same name to check it out. A few employees were there preparing for the upcoming storm making sure it was ready.

Setting Up Basecamp For The Night

The sun began to set so I was on my way.  A short time later there were signs notifying travelers the Mammoth Scenic Loop was only a short distance away.  I slowed down and made the turn.  I have only been here a few times before and wasn’t too sure where I was headed, but this seemed to be as good of a place as any.  Once on the loop I began to look for places to sleep for the night.  There were numerous options…and by options I mean snowmobile trails that wonder into the forest leading to who knows where.  About a mile in I found one that seemed doable and made a right turn.  The trail was pretty flat and smooth.  After a few twists and turns there was a level spot to park.  This would be home for tonight.  I got the van ready to sleep in, fed the dogs and ate Thanksgiving dinner for the second time.  Then we took a quick stroll under the moon light and it was back to the van to catch some sleep.  Tomorrow’s plans include checking out the city, ski resort and hiking Earthquake Dome to get a better view of the area.

No Friends So Plan B: Mammoth Mountain

After a solid sleep I woke to pretty cool temperatures.  It was in the upper 30’s, but not moving made it feel colder.  Coffee was the first chore of the day!  Now that I’ve had a “Cup of Joe” and Thanksgiving dinner part three, it was time to get going. I checked my texts and my friends were unable to make it. This would be a solo scouting mission. Driving back out the way I came the road was easy to see in the daylight. Mammoth Mountain Ski Area was calling so I headed West. It was located about 10 minutes up the road. There hasn’t been much snow to speak of in this region, so when I pulled up and saw most of the mountain covered I was impressed. The Mammoth crew did a pretty good job laying down the goods. Approaching the village it became apparent that it was going to be crowded and congested which is exactly what I was looking to avoid. There was an opportunity to make a quick U-turn so I did.  Off to hike.

Too Busy, So Plan C: Go For A Hike Up To Earthquake Dome

Earthquake Dome sits at an elevation of 9,387′ and is northwest of the ski area.  It’s a backcountry destination, and also the best vantage point to check out the surroundings. Once we arrived I threw on my backpack and hit the trail.  It was super windy, but that didn’t stop us. Roughly a mile in the trail disappeared. Not to be discouraged we continued. The top was the goal and the way was clear…Up. It didn’t seem too far. That’s because it gained elevation quickly. I can see how this would be a blast to lay down some lines.

My Only Option – Bear Crawl

Three quarters of the way and an hour and a half in my only option was to bear crawl to the top. I under estimated the pitch. Plus, the patches of snow and ice (not to mention the bear tracks) definitely made it more sketchy.  Another slow and steady hour and I reached the peak.  From here it seemed as if you could see to the end of the world. The view was worth the effort. As my breathe came back, Mammoth Mountain Ski Area reflected in the sunlight and caught my eye.  A little windy, but all the patrons looked like they were having fun.  As long as Mother Nature cooperates they should have another good year. After taking it in for a bit my attention turned due west.  I can’t describe the sight and a picture never does it justice, but there is definitely a reason this mountain chain is known as one of the best backcountry spot anywhere. The following were laid out in front of me:

By now I had worked up an appetite, so Thanksgiving dinner number 4 made a hearty lunch.  As I ate and gazed at the terrain, some routes were evident and some were still a mystery.  I relaxed and explored for another hour.  Feeling satisfied and a little exhausted it was time to head home. My research was complete for now. On the descent and drive home visions of excitement and adventure filled my head.  I always find it amazing how fresh air and the nature found in the Eastern Sierra mountains recharge the soul.