Spark. With water, nothing happens. But, throw gas into the mix… you get an explosion! That same principle applies to athletes and artists. While being good at your craft will lead to opportunities, without an attitude to remember, you won’t catapult yourself to infamy. Shaun Palmer has that “spark.” He might’ve won a string of titles in snowboarding, skiing, mountain biking & motocross, but it was his trash talking that put him into the forefront of extreme sports. Just like Muhammad Ali, he backed up that talk with action.

Something In The Water

Maybe it’s because the casinos offer you a chance to party all night. Or it might be that the competition for powder days are intense. No matter the reason, the south shore of Lake Tahoe has produced two of the most influential & polarizing athletes in action sports. Glen Plake on the two plank side. And my personal hero Shaun Palmer. He has always pushed the envelope regardless if it was on a board or two wheels. Alright, I’ll say it just the way Palm Daddy would with a sly grin and a Bud in his hand — “I think Shaun Palmer has done more for snowboarding in a week than Shaun White EVER did in his entire career.”

If you were forced to pick one saying that defines Shaun Palmer: Punk Rock. Like a Dead Kennedy’s song, he disdains authority, bold and brash, and most of all loud. He’s ALWAYS lived life 100%, didn’t care what people thought, and said what he believed was true. To this day, I still remember him riding down the halfpipe in the 1988 World Championships giving the organizers a big middle finger because he thought the event wasn’t good enough.

Did It His Way

That attitude can be seen throughout his career. For example, when he won the Legendary Banked Slalom at Baker back-to-back times in 1986 and ’87, he showed up in a Santa Claus hat with a ten-foot tail and a ball on the end with baggy clothes. He also brought baggy clothes and a confident swagger to mountain biking when the sport was about lycra.

Greatest Athlete Of All Time?

With all this talk, you better back it up and that’s exactly what he did throughout his career. In fact, back in 1998, USA Today made a statement as bold as any that Shaun Palmer could’ve said that he was the greatest athlete of all time. His resume is unlike any other in the world besides possibly Jim Thorpe. A 6 time Winter X-Games Gold Medalist in Boardercross & Skiercross. In 2001, he was awarded the ESPY Awards‘ Action Sports Athlete of the Year. An Olympian, although he tore his achilles tendon before he had a chance to compete. On a mountain bike, he won silver in the ’96 UCI World Championships, missing the top spot by just .15 seconds. In motorcross, Shaun began his career racing on the Supercross Tour. Palmer qualified for the tour on his first 125cc Supercross main event, an almost unheard of feat. The list of accolades just go on and on. ESPN might talk more about “normal” athletes, but I’d like to see any of them try their hand at the sports Shaun is good at.

If you want to hear his full story of how he went from rags to riches to almost dying from an overdose and getting re-born, check out the film:

Here’s a few of the best Shaun Palmer snowboard quotes we’ve read or heard over the years.

“I don’t know why they bother to show up they just humiliate themselves.”

“There’s no f**king drug in the world that could give you a high like that.”

“All I had to do was wear spandex to win, but instead I wore a baggy motocross outfit, because I thought spandex was stupid.” 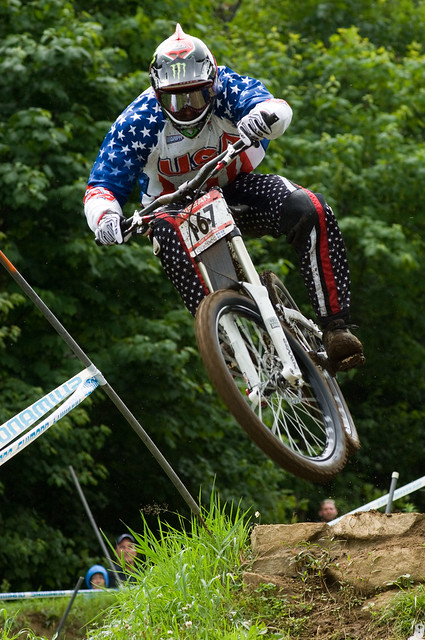 “Ya know, I might have to quit ’cause it’s just too damn easy for me.”

“When I woke up in the hospital, I knew that I had to do something to turn myself around… a lot of people don’t want me to succeed, but all that does is motivate me to kick their butts and show them I am still the world’s greatest athlete. Clipped in and sober.”

(About the Halfpipe) “It’s all twirlers now. Ballerina dancers. Euros, mostly. Ain’t hardly no Americans left in this sh*t no more.”

“Boardercross is the best! First guy down wins! No judges, no time clocks, just you, the course and the five other guys! True Grit!”

Shaun Palmer has done a lot for the culture and sport of snowboarding. While everyone is born an original, many of us end up being copies of others. Just like Glen Plake, Shaun is an original. In the end, it’s fine to have people to look up to, but you shouldn’t just copy them. Be yourself, speak from your heart, and most of all just like Palm-Daddy did in the 1987 world championship, give a big middle finger when you know it’s wrong.