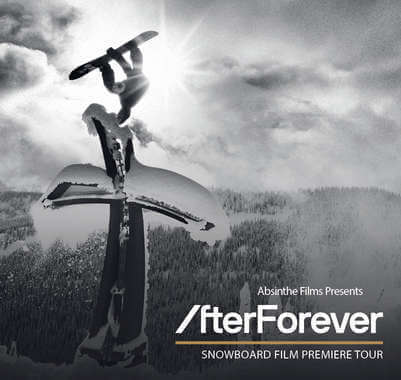 What is absinthe? Scientifically, it’s defined as a distilled alcohol made from herbs, spices, and water. In historical literature, it was described as the “green fairy” due to its color and hallucinogenic properties. This obscurity and legend fits perfect for the snowboard filming company Absinthe Films. Each year, they come out with a new film that is distinctive, elusive, and most importantly cutting edge. Their films have that mind-bending element, transporting you into the mountains where these professionals continue to push (and twist) the envelope.  From introducing Travis Rice to the masses and producing videos that are timeless include this year’s film: Absinthe Afterforever.

Absinthe’s camera angles, music selections, and roster of riders really set the landscape, making their film’s works of art that last way past their release dates and can be watched for years to come.  This year’s film is called – /fterforever.

Change is the only constant.

Resistance leads to stagnation and suffering while embracing it brings growth.

If you are anywhere near a movie-tour stop, we highly suggest dropping everything and go check it out!  To see the full list of tour stops, click here to look at our calendar.  Be sure to check back often as we continue to update it.

and most of all a helluva good time

Check out the trailer