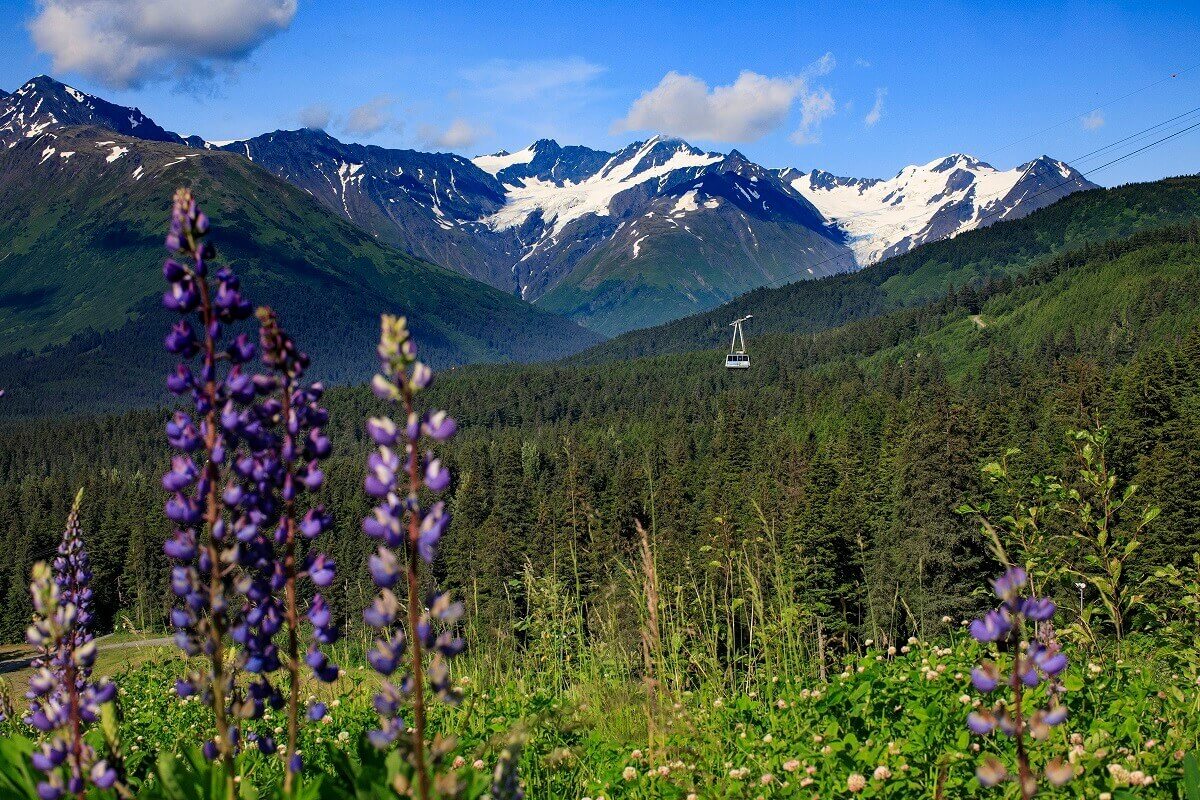 Of course, this list could be another listing of “easy” resorts to name like Lake Tahoe, Park City, or Jackson Hole. Instead of showcasing the popular mountains in summer destinations, we decided to focus on some lesser known spots. Here’s 10 mountain towns to visit in the summer and why.

In 2004, Wallace declared itself as the “center of the universe”, and just like this proclamation, this funky town is truly one-of-a kind. Even though it’s home to only 800 permanent residents, Wallace’s history could fill an entire book. From being the “Silver Capital of the World” to the ONLY spot on a U.S. interstate with a stop light, its colorful past is well worth the visit in itself. In addition, it’s home to amazing cuisine & crossroads to FIVE nationally recognized trails. These aren’t your normal everyday bike trails either. The Route of the Hiawatha is a fifteen mile rail-to-trail project featuring seven trestles and ten now defunct train tunnels. The trestles are as high as 230 feet and the tunnels are up to 1.7 miles in length. And for those looking for a bit more adrenaline pumping fun, only ten minutes from downtown is the world-class lift accessed mountain biking at Silver Mountain, offering up 3,400’ vertical feet of riding! There’s a lot to do when it comes to summer fun in the mountains.

When someone talks about mountain biking in Canada, the first place that comes up is Whistler. Even though this is a great option, for those looking for less crowded trails and a more relaxed vibe, you need to look east at Panorama & the town of Invermere. This resort is a two-time top-five winner in the MTB Parks.com Riders’ choice and a harbor of cycling fun that features natural features for all abilities alongside some man-made expert obstacles. Of course, summer fun in the mountains isn’t just about bike riding. You can also go for a leisurely kayak on Lake Windermere, whitewater raft on the Kootenay, or hop on an ATV with Toby Creek Adventures. For those that enjoy hiking, be sure to add Lake of the Hanging Glaciers on the itinerary. Around ten miles in length, it features rushing rivers, impressive waterfalls, serene forests, and of course massive glaciers. After a day full of adventure, you can go soak away those sore muscles at either Radium or Fairmont Hot Springs.

One of the biggest issues out West is many locations don’t get any rain at all. Zilch. That might actually sound nice, but by late July and August, mountain biking terrain begins to form into what many call “moondust.” What normally would be a benign singletrack becomes unpredictable. Corners are loose. The dirt becomes talcum powder-like. There’s a mythical place called Angel Fire in the southwest that doesn’t have that issue very often. The dirt is clay-like. Occasional afternoon summer thunderstorms keep the trails relatively tacky. The temps stay pretty temperate due to their elevation of over 8,000 feet. In addition to being voted by riders for the seventh time on MTBparks as the Best in the Southwest, it also hosts a vast assortment of other activities such as hiking trails, golfing, and even fishing. And you aren’t too far from the bustling metropolitan spots like Santa Fe or Taos if you want to do some shopping or sightseeing. Lastly, be sure to set aside some time in the evening to see how the region got its name “Angel Fire.” Hint: It’s from the sunsets.

There’s plenty of gorgeous sea-side towns in Washington such as Poulsbo which locals call the “Viking City.” But when it comes to mountain towns though, Leavenworth is the shining example in the region. Just east of Stevens Pass in the Cascade Mountains, it looks like a town you’d see in southern Germany. Originally a lumber town, it resembled more Deadwood than a Bavarian village until the 1960’s. It was when the lumber industry shutdown, town leaders knew that they had to do something or it would become a ghost town. So, they embraced their alpine surroundings and revitalized the center of town to look like a Bavarian Village. Expect to hear lots of German songs, smell tasty brats sizzling on a grill, and see stucco-covered buildings. And keep your eyes peeled for ospreys and eagles that make their home on the waterfront park of the river that runs through town.

With the exception of New York, Michigan boasts more ski areas than any other state. And the most famous one is Boyne, next to the cozy resort town of Traverse City. Even though in the winter it makes sense that skiers & snowboarders look West to the hulking peaks to feed their need for powder turns, in the summer, this place blooms for summer fun. Nestled on the Grand Traverse Bay of Lake Michigan, it’s well worth the trip. From scenic lake views so big you can’t see the other side to exhilarating mountain bike adventures on the 4,000 acres surrounding Boyne Highlands to the annual festivals like the National Cherry Festival, the opportunities for fun are endless. It makes sense why this hamlet was named the best small town in America in 2015 AND 2016.

The state of Colorado has no shortage of amazing towns. Beautiful, vibrant, and easy access to a host of activities. One that slips below that radar to visit for mountains in summer is Ouray. Nearly 300 miles away from the bustling metropolitan of Denver, it keeps the crowds to a minimum. Situated in a tight box canyon, many consider it similar to a town you’d find in Switzerland due to the hulking 14,000 foot peaks of the San Juans surrounding it. Besides the jaw-dropping scenery, the area is known for its world-class OHV off-roading as we highlighted in our article: The best destinations for off roading at a ski-town near you. For road cyclists, the mountain passes and county roads pose some pretty big challenges and mountain bikers can test their mettle on the R.A.T. or Ridgway Area Trail system. And after you’re done exploring the countryside, enjoy a soak in the hot springs. Don’t worry, they’re sulfer-free. No rotten egg smell here to ruin the ambiance.

Another mountain town that has a similar feel to the Swiss Alps but it’s in California is the cozy village of June Lake. While its boisterous neighbor of Mammoth Lakes hosts adrenaline pumping activities like Via Ferrata and mountain biking, June Lake is like the cool yet confident sibling. It knows what it has and doesn’t need to show it off. The town is also coming into its own renaissance as you can read about in our article: Something Exciting is Happening on The June Lake Loop. The same named scenic byway the town sits on is filled with dramatic Sierra peaks and alpine vistas. A chain of gorgeous lakes one after another featuring some of the best fishing in the state all nestle in the steep, horseshoe shaped canyon. You’ll also find world-class road cycling, hiking, boating, horseback riding, camping, and one of our favorite beer spots: June Lake Brewing or for those that enjoy wine, the Lift has an awesome selection of wines too.

For those looking to escape the mid-summer heat, there’s no “cooler” spot than Mont Sainte Anne. Renowned as the “mecca” of mountain biking in Eastern Canada. With the LARGEST cross-country bike network in Eastern Canada, it offers more than 80 miles of trails to ride alongside 23.1 miles of it being accessible via chairlift. Combine that with one-of-a kind endeavors like Via Ferrata, endless hiking opportunities, paragliding and jaw-dropping views of the mighty Saint Lawrence, and you can’t go wrong. Not enough? Only 30 minutes away is the capital of the province Quebec City. The city dates to 1535 and contains the ONLY fortified city walls remaining in the Americas north of Mexico alongside having world class cuisine.

For skiers & snowboarders, Alaska sets the bar for the steepest and most challenging terrain. Countless videos and magazines have showcased the insane peaks in this state. But summertime in Girdwood offers up even more adventures & endless daylight to get it all in. Nicknamed the “Last Frontier”, it’s truly stacked with wildness like no other place. From seeing grizzlies in the wild, salmon spawning, and of course the most popular attraction is the Portage glacier cruise. These vessels take you within 300 yards of the glaciers as they split and crash directly into the ocean. But that’s not all! Alyeska Resort serves up lift accessed mountain biking on the weekends. Or for the water variety, hop into a kayak in the Prince William Sound and really get a feel of this beautiful place.

Last but not least, we couldn’t have this list of ski towns to visit in the summer without including Timberline. For those skiers & snowboarders that NEED to ski in the summer as well, it’s home to the ONLY perennial ski resort that’s ALWAYS open. If that wasn’t enough, you have world-class hiking on the Pacific Crest Trail AND the National Historic Landmark Timberline Lodge. To top it all off, you’re only 60 miles away from the eclectic city of Portland.

As us “snow addicts” wait for winter to return for skiing, we don’t have to get depressed. Instead, make lemonade out of those summertime lemons & get that adventure fix by visiting one of these awesome ski towns in the summer. Happy trails to all!