The mountains are home to adrenaline pumping fun unlike anywhere else, but many of its sports require years to become good. Fortunately, summer is the time when ski towns roll out the red carpet to ALL. From beginner mountain bike trails to via ferrata, there’s an assortment of summer fun in the mountains you can have even as a first timer. If you’re ready to conquer your fear of heights or just challenge them, here’s the scariest bridges in the US & Canada you can visit near a ski town by you.

This fabled ski resort has been known for a while as an all-season destination. From hosting the legendary Crankworx Free Ride festival to the ultimate bash of music & snow at the Whistler World Ski & Snowboard Festival, they make sure the fun continues on and off the mountains. New for 2018 as part of the Canada Day celebrations, Whistler opened up a new attraction – The Peak Suspension Bridge. Located over 7,200 feet above sea level, this bridge has made the list as one of the HIGHEST suspension bridges in the world. Besides the knee wobbling views, it also links you to the West Ridge View Point. Jutting out 41 feet from the ridge, it gives you 360 degree views of the peaks and valley below. You’ll definitely feel why we think it’s one of the scariest bridges in the US & Canada.

Downstream from the modest town of Libby and the affordable powder mecca of Turner is the Kootenai Falls Swinging Bridge. Built by the US Forest Service as a way to help access forest fires across the river, it has now become a must see in this part of Montana. Requiring a moderate hike, once you arrive you’ll understand why it was well worth it. You’ll have a fantastic view of the Kootenai Falls! Considered one of the largest free-flowing waterfalls in the northwest, it may even look familiar. That’s because it was the setting for the movie “River Wild.”

Nearly anywhere in Seattle, the towering peak of Mount Rainier looms over the skyline beckoning you to come visit. For those seeking the wilder side of the national park, the trail to the Tahoma Creek Suspension Bridge is where it’s at. Besides the path not being maintained by the National Park Service, the 6.5 mile round trip adventure isn’t an easy one involving scrambling up & down hillsides. In addition, certain segments cross a river bed that washes out every winter making navigation a bit difficult. Once there though, you get the reward of seeing the longest and highest suspension bridges in the park. Soaring 165 feet above the Tahoma Creek, the park suggests that only one person at a time attempt to cross this 200-foot long structure. Why? Once you begin crossing, you’ll understand why.

Just a short jaunt down from Whistler/Blackcomb in North Vancouver is the Capilano Suspension Bridge Park. One of the older bridges on this list, it was constructed in 1889 and crosses the Capilano River some 230 feet above it. In 2011, this plank bridge surrounded by the lush evergreen forests of the Northwest was voted by Travel + Leisure as one of the most spectacular pedestrian bridges in the world. If that’s not enough to entice you, the dizzying heights will mesmerize you. Vancouver also has another bridge to check out called the Lynn Canyon Suspension Bridge. It swings 164 feet over the canyon floor in Lynn Canyon Park.

Deep in the Blue Ridge mountains near Sugar Mountain Resort & Beech Mountain is a suspension bridge that all thrill seekers will enjoy. The Mile-High Swinging Bridge, aptly named because it’s located at 5,280 feet above sea level, is a great place to take in the surrounding views. While North Carolina may not be listed as an extreme weather destination, Grandfather Mountain where this bridge is built says otherwise. This peak sees some of the most extreme meteorological events on the east coast. Wind speeds of 100 mph or higher are not uncommon. With that being said, both Beech Mountain & Sugar Resort offer lift accessed mountain biking and a vast network of hiking trails. It’s the perfect combination for elevating your sense of adventure and fine-tuning your harmony with nature.

Taos has really started to put itself on the map not just for its steep skiing or the Taos Pueblo but as a summer adventure destination that will include Via Ferrata and lift-accessed mountain biking. Another treasure in the area to check out ANY TIME of year is the Rio Grande Gorge Bridge. When it was built it was nicknamed the “Bridge to Nowhere” because it didn’t have the funding to continue the road on the other side. Driving over it isn’t a big deal, but as soon as you park at the visitor lot and start walking across the bridge, it becomes a game changer. Despite the bridge being well built, you’ll FEEL every car whooshing past shaking the entire structure. And the cherry on top? Right in the center, there’s a small deck that you can step out and look all the way down to the legendary Rio Grande.

Stats: Difficult hike to see a bridge from a bygone era 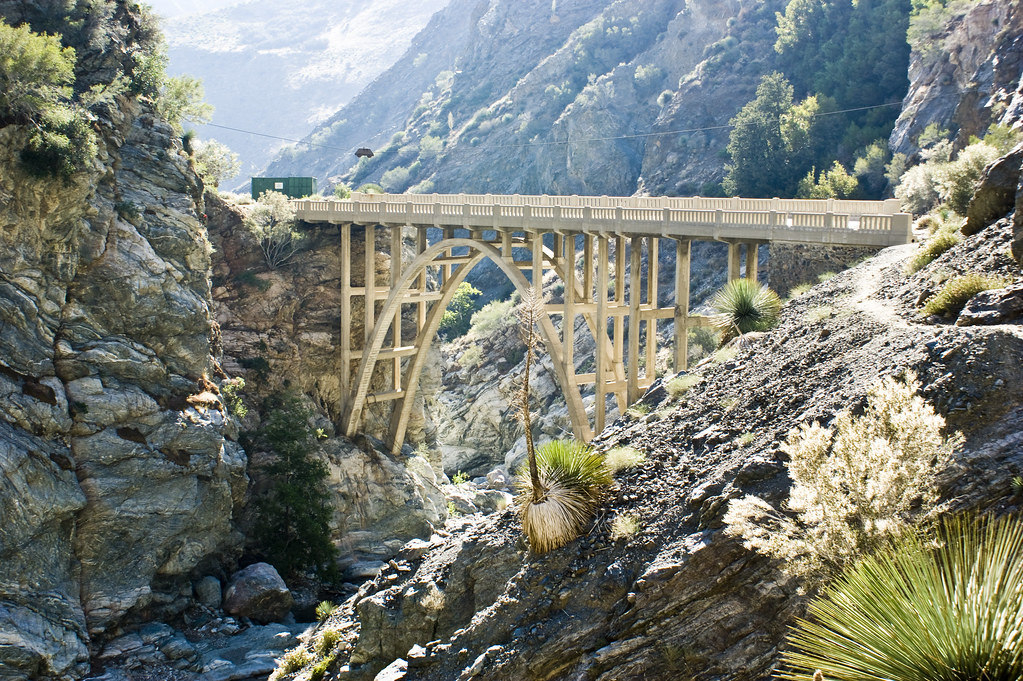 While not a suspension bridge per say, it’s storied past makes this an interesting bridge to visit. The Truss Arch Bridge, built in 1936 just west of Mt Baldy & Mountain High, was originally planned to link San Gabriel Valley to Wrightwood, California. It was billed to become one of the most scenic roads in the United States. Due to inclement weather in 1938, the partially constructed road washed out, stranding the bridge. Not a single car EVER drove on it!

Today, this historical treasure is only accessible by a 10 mile round trip hike. The journey ascends over 2,760 feet and forces people to ford the river six times! While the bridge isn’t scary, the adventure to it is. There have been a large number of deaths along the San Gabriel River due to these river crossings. While the road to it and other bridges have washed out, this lone “Bridge to Nowhere” stands firmly unused and alone.

As you can see, summer doesn’t mean you can’t get your adrenaline fix until the snow starts flying again. Instead, get creative and visit one of these knee-wobbling, butt-puckering, scariest bridges in the US & Canada and get in some amazing scenery. From the intense to the sublime, these all are adventures to get your heart pumping. You know these (well, some of them) will be on our bucket list and hope they’ll be on yours too.