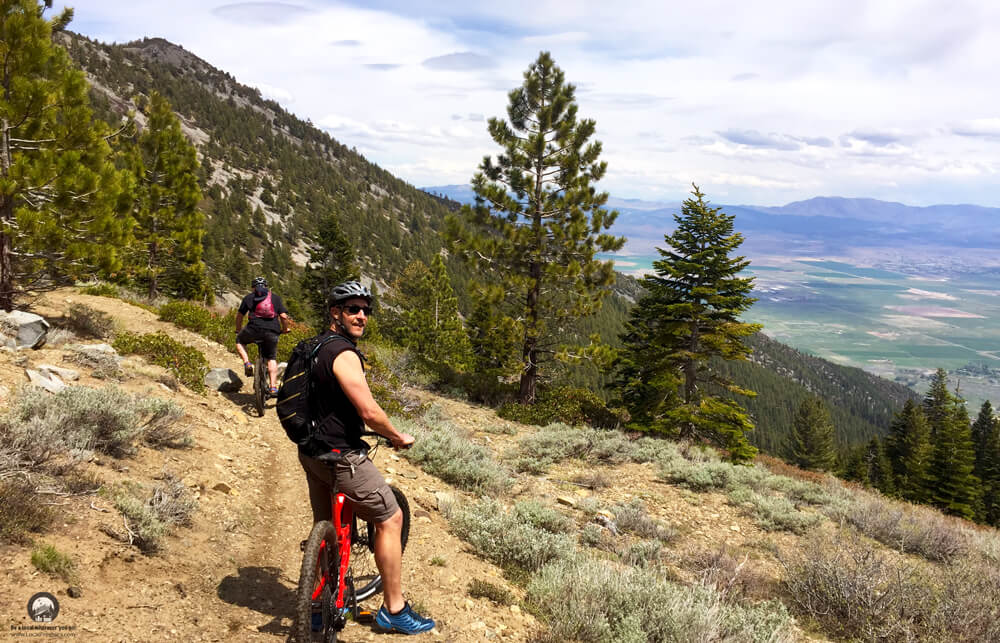 View of Carson Valley in the distance

When the First Tracks film came out about the Sierra Canyon Trail, it caught our attention. Pulling into the historic town of Genoa on our metal steeds like cowboys on horses was tantalizing. After a long-fought descent, we’d hop off our saddles and mosey on in the oldest bar in Nevada for a cold one. It sounded unreal. This trail was on our radar for a while, but it wasn’t until we showed it to our friends that the dream became a reality.

For the past few weeks, my buddy Noel has been in town gettin’ after it in zones like Powerline, Tahoe Mountain, and Corral. Each trail has helped him gain confidence in his abilities and acclimate to the mountains. Little did we know that the Sierra Canyon Trail would test all our skills to the limits. The original plan was to hit it on a Saturday, but due to equipment malfunctions and unfriendly weather, we had to delay the adventure till Sunday. If you’re looking for a warm up or something a little less hairy or even more extreme, check out our our comprehensive Lake Tahoe Mountain Bike Trail Guide.

From all the information we could gather, it seemed the best option to get to the Sierra Canyon Trail was to park at Kingsbury North and ride up the gravel road next to the Tahoe Rim Trail. From the map, it looked like an easy five-mile ride. Boy were we wrong!

After the initial half-mile climb out of the Kingsbury North Trailhead, the road gave us a much too short downhill respite. From there, we were back onto another climb. The terrain just didn’t let up. While it might’ve only read a 300’+ vertical climb, it was arduous. Up, down, up, down… it was like a 100 burpees mountain-bike style. For every short downhill, it paid us back in climbs that were long and painful. If that wasn’t hard enough, multiple climbs were covered in sandy soil and rocky outcroppings. This forced all of us to get off our bikes and walk up a few of them. It was frustrating to say the least.

Local Freshies® Tip: Afterwards, our friends said the best way to get to Sierra Canyon Trail is to do the ACTUAL Tahoe Rim Trail.

As we neared the final ascent towards the Sierra Canyon Trail entrance, one more obstacle appeared. Even though it was June, there stood massive drifts of snow. Oh boy! Yet another challenge thrown into our path. We navigated around a few of them, but some were so large that we had no choice but to posthole through them. Hopping back onto our steeds, we finally cruised up to the entrance.

The Views Off Of Sierra Canyon Trail Are Insane

Setting our shocks to soft, we drop in. Immediately, we’re blown away at the views. Nearly 4,000 vertical feet down, we can see Carson Valley stretching out in the distance. To our left is Genoa Peak, yet another 700 vertical feet above us. Grinning ear to ear, we slowly meander our way down the trail. The smooth dirt trail quickly transitions into a flat rocky surface.

Zipping down the mountain, we encounter our first section of shale to cross. A slope of massive blocky boulders are interrupted with a flat-ish narrow path. From afar, it looks flat, but once you hit it, you get bounced around like a ping pong ball. High in the alpine with nothing blocking our view, my nerves begin to fray. To my right, the steep thousand-foot drop-off causes my mind to say, “Hell Naw!” My fear of heights is triggered. Instead of riding it, I choose to walk each section of shale out of terror, knowing my mind state was in the wrong place.

Not Recommended For People With Any Below Average Dental Work

In between each shale section is a rough trail filled with rocks smashed into dirt. The ride is so rough that if you had any loose fillings, they might shake out. We come across switchback after tight switchback. Instead of soft dirt, these turns are built with more rocks and boulders following the curves.

After about a quarter of the way down, we transition from high open alpine terrain to steep tree covered forests. The hits just keep coming. Gripping the handlebars tight, we keep moving forward. Occasionally we stop giving our forearms and backs a rest. After about two hours of descending, we pull out the map. Our jaws drop. We’re still only halfway down. Holy crap! Continuing, we notice the shale zones are getting shorter albeit still there.

Loss of Focus Leads To An Accident

As the trees are replaced by grassy slopes, we stop to patch up Noel. He gripped the bars so tightly that the skin on his thumbs rubbed completely off. Wrapping them up, he drops into the run with gusto. Suddenly, we hear Noel yell “Gonna need some more tape!” We all pull up and see blood dripping down his forearm onto the ground in a fury. Uh oh! Luckily, Shane is a cool cucumber when mountain-stuff hits the fan. Tossing his bag onto the ground, he pulls out the med kit. He washes out the battle wound and evaluates the situation. The fall created a nasty gash in Noel’s forearm. Quickly wrapping it up, Shane says he’ll need stitches. Still two miles out, we make the decision to walk out slowly and try to keep the danger low while limiting the bleeding.

Ice Cream Was Promised… and We Delivered

After five hours of riding, we finally make it to the end. Even though Noel needs to be stitched up, he still wants his ice cream. Due to the crash, our original destination of the Pink House is already closed. Instead, we head over to the Genoa Country Store. Sitting at a picnic table enjoying some local ice cream, we look up at the horizon.

Nearly ten miles and 4,000 feet above us are the peaks we just rode down. One word: Wow! Is the Sierra Canyon Trail for everyone? Nope. This is one serious trail to even get to, let alone ride down. You should be at least a mid-level intermediate. Would we do it again? Years later after this initial ride, we look back at this experience and think maybe we should. If you want a full run-down of the best trails in the area based on your skill level, check out our in-depth Lake Tahoe Mountain Bike Trail Guide.

With our ice cream finished, it’s time to head over to the ER and get our boy sewed up. Eleven stitches later and a bag full of medical paperwork, we ascend back up to Tahoe. Noel quietly looks out window and says, “We did this?!? We actually rode down an entire mountain. Now THAT’S an accomplishment.” The mountain may have beaten him, but it didn’t break his spirit. I’m pretty sure he’ll be back in the saddle sooner rather than later. If you want to read more about our endeavors around the shores of Tahoe to the mighty Grand Tetons or get some tips on gear, check out our comprehensive guide on all things two wheel related: The Down & Dirty On Mountain Biking.